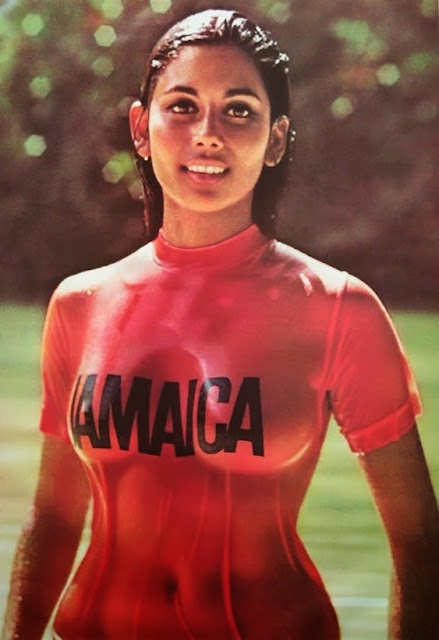 I have been slowly re discovering Pinterest and have been pouring
over some fantastic 1970's posters on there.
This one caught my eye - perhaps for obvious reasons (kinda hard not to notice it!),
but also because I remembered it from a scene in the 1988 film Cocktail.

I found some information on the beautiful model Sintra Arunte-Bronte,
on a site called Jamaica Gleaner...

Sintra Arunte-Bronte caught the eye of a photographer who had been commissioned
by the Jamaica Tourist Board to do the poster in 1972.
The photographer had been scouting for a woman to portray the beauty of an
island woman. It took seven and a half hours to capture the right effect.
Sintra said at the time she never thought the poster would have such an international impact.
The poster now graces the walls of airports, Jamaica Tourist Board offices worldwide,
hotel lobbies and travel agencies internationally.
Other than the few dollars she was paid to model, Sintra never received any royalties.


Here is the short clip of the poster in the movie Cocktail...

I used to dig Tom Cruise back then.
Long before Katie, the couch incident and beyond...