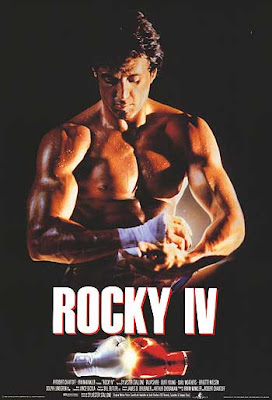 I love an underdog story, and they don't come much better
than the Rocky series - all six of them.

My favourite of the Rocky films is Rocky IV.
Released in 1985, the fourth installment of the Rocky series
was the most financially successful Rocky film.

Rocky travels to the USSR to avenge the death of his former
opponent and best friend Apollo Creed.
Ivan Drago is the enemy. A seemingly heartless,
Russian fighting machine, responsible for Apollo's death.

One of my favourite scenes is Rocky's training montage, in preparation
for his fight with Ivan Drago, set to the tune 'Hearts on Fire' sung by John Cafferty.

Drago has the high tech equipment, a large team of trainers, & steroids.
In contrast, Rocky uses the elements, and trains with sheer hard work,
determination and heart.

This clip makes me want to run to the top of a mountain
(or maybe just the top of my drive way) and yell out
"Dragggooooooo!!!!"